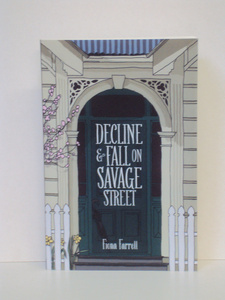 A house with a fanciful turret is build by a river.

Unfolding within its rooms are lives of event and emotional upheaval.  A lot happens.  And the tumultuous events of the twentieth century also leave their mark, from war to economic collapse, the deaths of presidents and princesses to new waves of music, art, architecture and political ideas.

Meanwhile, a few metres away in the river, another creature follows a different, slower rhythm.

And beneath them all, the planet moves to its own immense geological time.

With insight, wide-ranging knowledge and humour, this novel explores the same territory as its non-fiction twin, The Villa at the Edge of the Empire.  Writing in a city devastated by major earthquakes, Fiona Farrell rebuilds a brilliant, compelling and imaginative structure from bits and pieces salvaged from one hundred years of history.

A lot has happened.  This is now is might have felt.