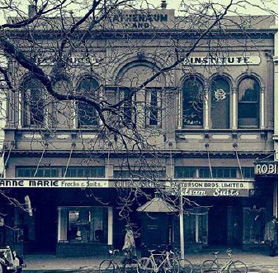 The Dunedin Athenaeum & Mechanics’ Institute moved to its present site in the Octagon, Dunedin, in 1870. It is the oldest surviving main centre Athenaeum in New Zealand still used for its original purpose.

Last year the Dunedin Athenaeum and Mechanics’ Institute was privileged to have respected broadcaster, historian and writer Jim Sullivan write a history of the library’s sometimes turbulent past.  Jim has been successful in teasing out the human side of the story as strong personalities throughout the years have shaped the development of the library.

The book Reading Matters is available for $50 at the Athenaeum Library 23 The Octagon; Paper Plus in the Golden Centre, George Street, Dunedin and The University Book Shop, 378 Great King Street, Dunedin.

Here are some extracts from Reading Matters by Jim Sullivan.

The Athenaeum (from the Athenaion in Athens where poets read their works) was the name given to a school in ancient Rome where the arts were studied. In modern times Athenaeum has been used as the name for an institution which promotes literary or scientific learning or for a reading room. (page 8)

As with almost all matters in the new colony factional interests intervened. Surveyor Charles Kettle and magistrate A Chetham Strode were annoyed about being omitted from a list of patrons, some harsh words were exchanged and a substantial number of donations withdrawn. (page 16)

Rattray Street (the present site of the Cargill Monument) …The building was to be “in the Grecian-Doric style of architecture” and would have two rooms able to accommodate up to a hundred people and two reading or class rooms which could be made into one room by removing a partition. It would have a shingle roof and the chimney in the centre was to become something of a landmark….The finished building was regarded as an odd one, a square with a peaked roof and an array of windows separated by pilasters on each side. The interior had no ornamentation or decoration and the floor space, with the exception of the room taken up by the plain deal table with a baize cloth and its surrounding of hard forms, was left clear to accommodate as many people as possible….The opening of the Mechanics’ Institute was one of the highlights of the short history of the small town. (page 17)

Join the Athenaeum and receive ‘Reading Matters’, by historian and writer Jim Sullivan - a history of the library’s sometimes turbulent past 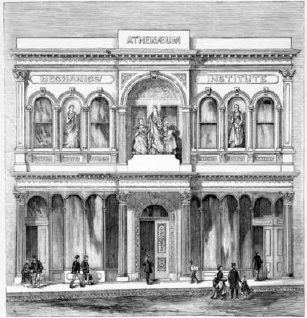 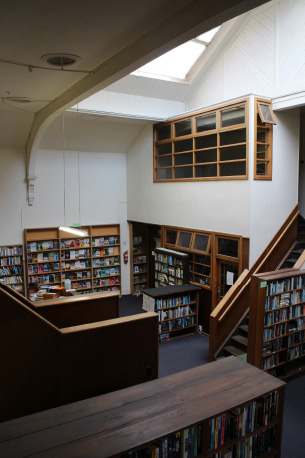