January 1950.  Lady Anne Coke, the eldest daughter of the 5th Earl of Leicester, is in Scunthorpe on a business trip when she is called home after a sudden death in the family.  She returns to Holkham Hall to discover a mystery: her beloved grandfather has been found dead at the bottom of a flight of stairs with a valuable piece of jewellery in his pocket.  No one can find a cause of death, and some even suspect foul play from the ghost who supposedly haunts the house.  But Anne’s suspicions are aroused; she grew close to her grandfather when they lived together during the war and she is determined to discover the truth.

During World War II, Holkham Hall was an army base with large sections out of bounds, and 11-year-old Anne was in the care of a new governess, whom she hated and believed to be deceitful.  Although she had been told to stay away from certain parts of the house, Anne used the secret passageways and the cellars to move around unnoticed.  And something she saw then could unlock the mystery of her grandfather’s death now… 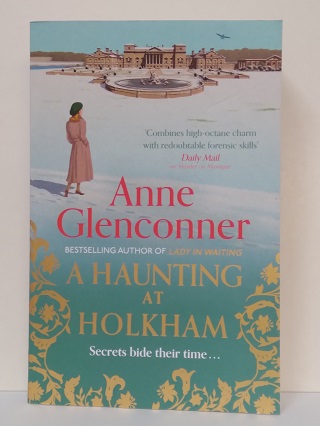