The streets of Cairo make strange music.  The echoing calls to prayer; the raging insults hurled between drivers; the steady crescendo of horns honking; the shouts of street vendors and radios blaring from every sidewalk.  Nadia Wassef knows this song by heart.

In 2002, with her sister, Hind, and their friend, Nihal, she founded Diwan, a fiercely independent bookstore.  They were three young women with no business degrees, no formal training, and nothing to lose.  At the time, nothing like Diwan existed in Egypt.  Culture was languishing under government mismanagement, and books were considered a luxury, not a necessity.  Ten years later, Diwan became a rousing success, with ten locations, 150 employees, and a fervent fan base.

Frank, fresh and very funny, Chronicles of a Cairo Bookseller is a portrait of a country hurtling toward a revolution, a feminist rallying cry, and an unapologetic crash course in running a business under the law of entropy.  Above all, it is a celebration of the power of words to bring us home. 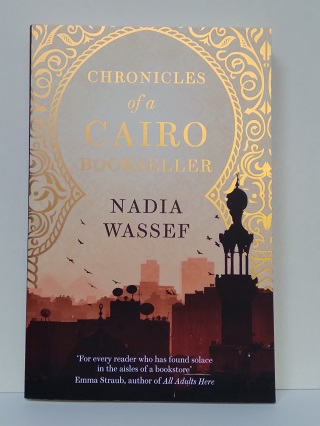