It’s been four months since Tippy, Uncle Pike and Devon were together for Christmas.  Now back for the first anniversary of Tippy’s father’s death, The Nancys are re-formed when Riverstone is rocked by an early morning explosion that kills three people and destroys the town hall.

A new case is born.  Is the accused bomber really guilty?  Is there a second bomber?  And if so, does that mean a threat to destroy Riverstone Bridge is real?  And is asparagus a colour?  Once again, it is up to the Nancys to go against the flow, and ignore police orders, to get to the truth.

It’s great to be back in Nancy business again, but this time it’s all different.  Uncle Pike and Devon can’t agree on anything and Tippy is learning hard truths about the world and the people she loves the most.  Can the Nancys stay together to do their best work and save the town?  Or will the killer strike again?  When everyone is right, does that make you wrong?  And can Tippy ever trust anyone again. 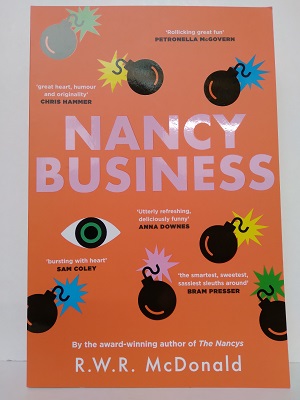