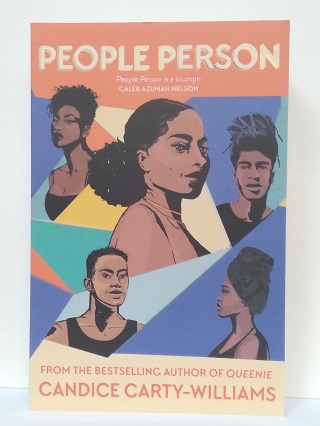 Dimple Pennington knew of her half siblings, but she didn’t really know them.  Five people who don’t have anything in common except for faint memories of being driven through Brixton in their dad’s gold jeep, and some pretty complex abandonment issues.

Dimple has bigger things to think about.  She’s thirty, and her life isn’t really going anywhere.  An aspiring lifestyle influencer with a terrible and wayward boyfriend.  Dimple’s life has shrunk to the size of a phone screen.  And despite a small but loyal following, she’s never felt more alone.

That is, until a catastrophic event brings her half siblings, Nikisha, Danny, Lizzie and Prynce, crashing back into her life.  And when they’re all forced to reconnect with Cyril Pennington, the absent father they never really knew, things get even more complicated. 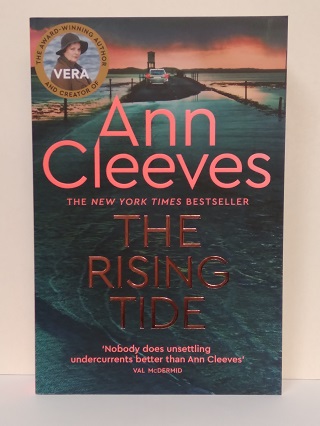 DCI Vera Stanhope returns in The Rising Tide, the tenth novel in the perennially popular series, from the number one bestseller Ann Cleeves.

Fifty years ago, a group of teenagers spent a weekend on Holy Island, forging a bond that has lasted a lifetime.  They still return every five years to celebrate their friendship, and remember the friend they lost to the rising waters of the causeway at the first reunion.

Now, when one to them is found hanged, Vera is called in.  Learning that the dead man had recently been fired after misconduct allegations, Vera knows she must discover what the friends are hiding, and whether the events of many years before could have led to murder then, and now …

But with the tide rising, secrets long-hidden are finding their way to the surface, and Vera and the team may find themselves in more danger than they could have believed possible … 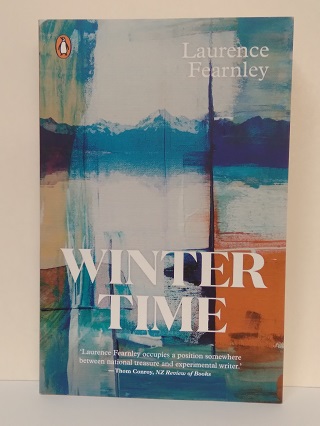 Having returned to the Mackenzie Country to deal with the unexpected death of his brother, Roland has more than enough on his plate.  He could do without the demands of a cantankerous neighbour, the complaints of his partner back in Australia and discovering that someone is impersonating him online, stirring up the locals against him.

Even the weather is hostile, rendering roads unpassable and his old home an icebox, the fire offering little comfort.  And yet, when cycling on the empty roads, cocooned in a snow-muffled landscape, he finds he can confront what he actually feels. 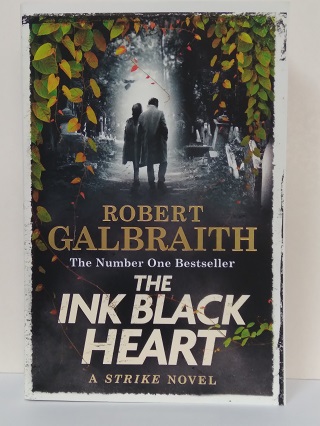 When frantic, dishevelled Edie Ledwell appears in the office begging to speak to her, private detective Robin Ellacott doesn’t know quite what to make of the situation.  The co-creator of a popular cartoon, The Ink Black Heart, Edie is being persecuted by a mysterious online figure who goes by the pseudonym of Anomie.  Edie is desperate to uncover Anomie’s true identity.

Robin decides that the agency can’t help with this – and thinks nothing more of it until a few days later, when she reads the shocking news that Edie has been tasered and then murdered in Highgate cemetery, the location of  The Ink Black Heart.

Robin and her business partner Cormoran Strike become drawn into the quest to uncover Anomie’s true identity.  But with a complex web of online aliases, business interest and family conflicts to navigate, Strike and Robin find themselves embroiled in a case that stretches their powers of deduction to the limits – and which threatens them in new and horrifying ways … 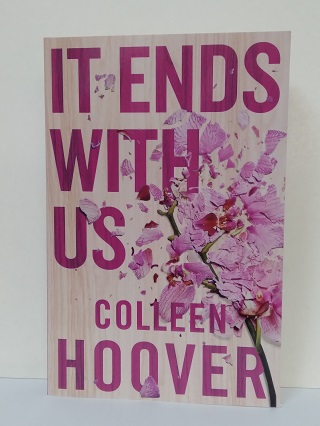 Lily hasn’t always had it easy, but that’s never stopped her from working hard for the life she wants.  She’s come a long way from the small town in Maine where she grew up – she graduated from college, moved to Boston, and started her own business.  So when she feels a spark with a gorgeous neurosurgeon named Ryle Kincaid, everything in Lily’s life suddenly seems almost too good to be true.

Ryle is assertive, stubborn, and maybe even a little arrogant.  He’s also sensitive, brilliant, and has a total soft spot for Lily, but Ryle’s complete aversion to relationships is disturbing.

As questions about her new relationship overwhelm her, so do thoughts of Atlas Corrigan – her first love and a link to the past she left behind.  He was her kindred spirit, her protector.  When Atlas suddenly reappears, everything Lily has built with Ryle is threatened. 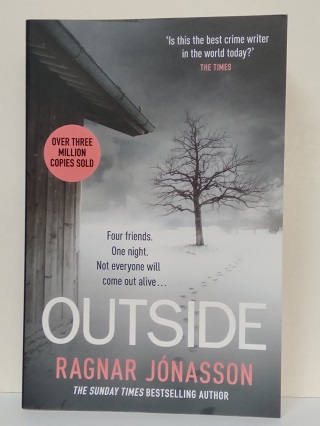 Ina deadly Icelandic snow storm, four friends seek shelter in an abandoned hunting lodge.  Miles from help, and knowing they will die out in the cold, they break in, hoping to wait out the storm until morning.

But nothing prepares them for what’s inside …

With no other option, they are forced to spend a long, terrifying night in the cabin: watching as intently and silently as they themselves are being watched.

As the night darkens, old secrets spill into the light – and tensions rise between the four friends.  Soon it’s clear that what they discovered in the cabin is far from the only mystery lurking there.

Nor the only thing to be afraid of … 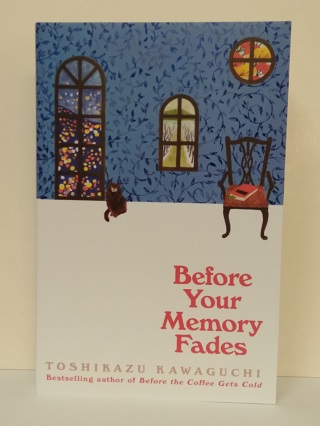 Before Your Memory Fades (September 2022)

The third novel in Toshikazu Kawaguchi’s sensational ‘Before the Coffee Gets Cold’ series.

On the hillside of Mount Hakodate in northern Japan.  Cafe Donna Donna is fabled for its dazzling views of Hakodate port.  But that’s not all.  Cafe Donna Donna offers its customers the extraordinary experience of travelling through time and Nagare and Kuzu are back to guide four new customers.

There are rules to follow : you can only meet people who have visited the cafe, you must stay seated in your chair and most importantly, you must return to the present before the coffee gets cold.

In Before Your Memory Fades, we meet: the daughter who resents her deceased parents for leaving her orphaned; the comedian who aches for his beloved and their shared dreams; the sister whose grief has become all-consuming; and the man who realized his love for his childhood friend.

Heartwarming and poignant.  Kawaguchi explores how holding on to the past can affect our future, and asks the reader: would you travel in time if your actions couldn’t change the present? 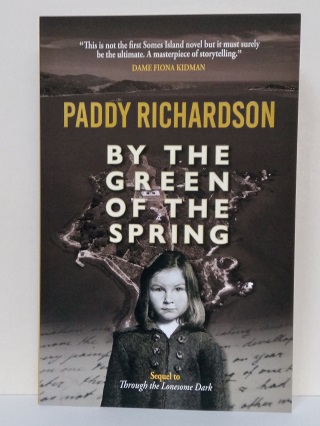 Otto Bader, Pansy Williams and Clem Bright live in the small mining town of Blackball on the West Coast, shaped by stories and the dream of a better, more equal society to come.

But the First World War erupts and Otto, being of German descent, is torn from his family and the love of his life, Pansy, to endure the war interned as an enemy alien on Somes Island in Wellington Harbour.  His suffering with the other internees, the culture of brutality and abuse of power by those in charge, is both chilling and truthful, and all the more poignant by taking place within sight of the capital city.  Both his present and his future appear to be stolen from him.

Love, loss and abandonment haunt both Otto and Pansy, with reverberations far into the future.  Lena is their child.  Spirited, clever and perceptive, she tells her own story of growing up in the close-knit Bright family and the changes that occur when Clem returns from the war damaged both physically and psychologically.

Lena’s journey to adulthood is beautifully portrayed as she observes the people who make up her family and develops into an educated and creative young woman.  Blackball is where she belongs and it is the place she recalls when she paints her memories. 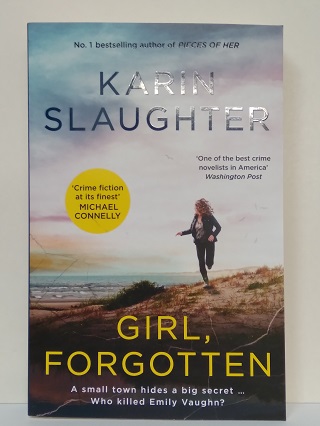 A girl with a secret …

Longbill Beach, 1982.  Emily Vaughn gets ready for prom night, the highlight of any high school experience.  But Emily has a secret.  And by the end of the evening, she will be dead.

A murder that remains a mystery …

Forty years later, Emily’s murder remains unsolved.  Her friends closed ranks, her family retreated inwards, the community moved on.  But all that’s about to change.

One final chance to uncover a killer …

Andrea Oliver arrives in town with a simple assignment: to protect a judge receiving death threats.  But her assignment is a cover.  Because, in reality, Andrea is here to find justice for Emily – and to uncover the truth before the killer decides to silence her too …